2.2. Preparation of solutions with magnetite nanoparticles

3.1. Characterization of the magnetite samples

3.2. Characterization of the microfluidic device

4. Simulation of fluid flow through the microchannel


We present in this paper experimental results regarding the control the fluid flow of aqua solution whit different nanoparticles such as magnetite  Fe3O4, magnetite Fe3O4  functionalized with silver particles, Fe3O4functionalized with gold particles, and gold nanoparticles by an array of Cr/Au electrodes in a microfluidic system. The crystals of magnetite nanoparticles used in this experiment, with particle size in the range of 10 nm, were synthesized by the coprecipitation method from an aqueous Fe3+/Fe2+ solution. The microfluidic system was fabricated using SU-8 polymer and it consists of an inlet, an outlet and a microfluidic channel with width of 200µm control and length of 8250µm. The electrodes were configured on the bottom of the microchannel. They are used to apply a small voltage on the solution in the microchannel. The microfluidic system was characterized by optical microscopy, white light interferometry and SEM (scanning electron microscope). We simulate the distribution of the fluid velocity in the channel and we study the movement of aqua solutions with different nanoparticles in the microfluidic system under the influence of different voltages were applied, with different polarities.


The use of magnetic particles for isolation and preparation of bio-cells and proteins is considered to be great interest in bioscience . The magnetite nanoparticles are attractive materials for application in biomedical area such as diagnostic techniques, drugs, and prostheses and implants. Interest is booming in biomedical applications for use of nanoparticles in cell therapy (marking cells), cell biology (separation and purification of cells populations), tissue repair, drug transport to the affected area, and magnetic resonance . Among them, the magnetite (Fe3O4) is one of the most suitable magnetic materials for bio-applications because it has demonstrated a low toxicity and it is well tolerated by the human body. The magnetite (Fe3O4) has an inverse spinel cube structure. The oxygen atoms form a closed packing and iron cations occupy tetrahedron or octahedral interstitial positions. Electrons can jump between ions Fe2+ and Fe3+ in octahedral positions at room temperature [24]. The magnetite nanoparticles were functionalized before being embedded with gold and silver. In the aqueous solutions have been introduced different nanoparticles: magnetite (Fe3O4), Fe3O4Ag, Fe3O4Au, and gold nanoparticle. We simulated the liquid flow within the microchannel using COMSOL multiphysics software, in order to determine the fluid velocity, therefore the minimum debit of the microfluidic system. The flow was considered to be laminar and incompressible. There were calculated the velocity and the flux of the fluid flow under a pressure gradient of 20 Pa from the entrance reservoir to the exit reservoir. The electrical behavior of the magnetite samples under the influence of electric field produced by the electrodes inside the microchannel was measured using an oscilloscope.


The microfluidic device was fabricated on p type silicon wafer < >. First, an isolation oxide of 0.5µm layer was thermally growth. After this, a 200nm thick layer of Cr/Au was deposited by vacuum evaporation technique on the wafer. The electrodes were patterned using photolithography and, subsequently, the Cr/Au was etched. The electrode shape is that of a comb with the fingers (four) interdigitated with the opposite electrode. The dimension of the electrode is 750µm with a space of 280µm between them. A 30µm layer of SU-8 2050 polymer was deposited by spinning and the microchannel with the two reservoirs was pat- terned using UV lithography. It is well known that it is easy to obtain by lithography SU-8 microchannel walls with high aspect ratio. In Fig. 1 is presented the fabricated microfluidic device. The dimension of the reservoirs diameter is 200µm. The microchannel length is 8520µm and the width is 200µm. These dimensions allows an easily introduction of the magnetite solutions in the inlet reservoir and the control of the fluids flow inside the microchannel. 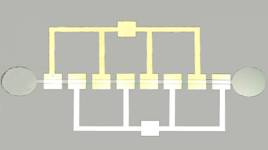 2.2. Preparation of solutions with magnetite nanoparticles


The synthesis of magnetite particles was made by mixing two solutions of FeCl2 and FeCl3 in the molar concentration of 1:2. After that, droplets of ammonia solution with 1 molar concentration were added at equal amount of time until it was achieved the value 10 for pH of the solution. It is important to add constantly the ammonia solution so the particle size to be uniform. By filtering this solution we obtained the magnetite particles with dimensions mostly around 10 nm. These particles were used further after functionalization in all solutions.

aqueous solutions. If the size distribution of the magnetic nanoparticle is very narrow, an agglomeration of particles appears due to magnetization phenomenon that occurs frequently in obtaining uniform magnetic fluids [11].

3.1. Characterization of the magnetite samples


The characterization of simple or functionalized magnetite samples was performed using the scanning electron microscope SEM. The aqueous solution with nanoparticles was placed on the glass slide and, after that placed in a controlled atmosphere, at room temperature to dry out. The magnetite crystals sizes vary between 0.21 and 4.28µm. In Fig. 2 it can be seen SEM pictures for the other two types of nanoparticles.


The specific Fourier transform infrared spectroscopy (FTIR) was done for magnetite particles and FTIR spectra are shown in Fig. 3. The samples for FTIR were prepared by grinding a quantity of the sample with a specially purified salt (potassium bromide) finely (to remove scattering effects from large crystals). This powder mixture is then crushed in amechanical die press to form a translucent pellet through which the beam of the spectrometer can pass. FTIR spectroscopy highlighted the specific spectrum of magnetite wavenumber of 391.67 and 554.75cm 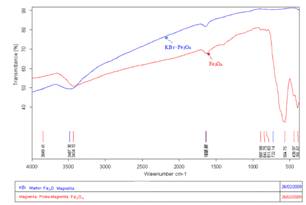 
3.2. Characterization of the microfluidic device.


The microfluidic device was characterized using a white light interferometer (WLI) resulting the 3D profile of the whole device with details in the reservoir area and in microchannel area and it is presented in Fig. 4.WLI is used as a instrument for profilometry by measuring the centre of the axial signal response from a surface [12,13]. WLI can measure the position of the surface to accuracies of up to 1 nm.

Fig. 4. 3D profile of the reservoirs and the microchannel (without magnetite nanoparticles).

The 3D profile obtained by WLI gives the measured parameters for the microfluidic systems as following: thickness of microchannel layer is 34µm, reservoirs diameter is 1467µm and microchannel width is 224µm. These values are in accordance with the designed values. In Fig. 5 are presented 3D images of the device with the aqueous solution with magnetite nanoparticles functionalized

Fig. 5. 3D profile of the reservoir and the microchannel with magnetite nanoparticles.


Different voltages were applied on the both electrodes in order to analyze the behavior of the microfluidic system from electrical point of view. The metals particles under the action of an electric field generated by the current circulating in the electrodes migrated in the aqueous solution in the channel from the inlet reservoir to the outlet reservoir. If the polarization on the two electrodes is reversed, we observed the movement of the particles in an opposite direction. Experiments were realized with solutions containing magnetic particles functionalized with silver and gold particles. The voltage values varied from 1.5 to 5V. The particles migration started from 2.5 V. After testing the three types of solutions, the best result was obtained for aqueous solution with magnetic particles (Fe3O4) functionalized with gold particles (Au) and it is represented in Fig. 6 the currentvoltage characteristic in direct and reverse polarization, directly on the oscilloscope screen. 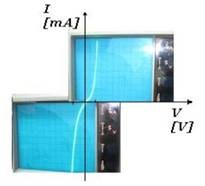 Fig. 6. Currentvoltage characteristic of the device with magnetite nanoparticles.

4. Simulation of fluid flow through the microchannel


Fluid flow through the microfluidic channel was performed using the specialized simulation software COMSOL. The simu-lations were performed to determine the velocity field of the fluid in absence of electrical field. To determine this parameter is very important because it is involved in determination of fluid debit. In this simulation the flow was considered to be laminarn and incompressible. Therefore, the simulations were done using the application mode General laminar flow that uses the NavierStokes model for fluid flow. The pressure at the inlet of the microchannel was considered to be 20 Pa s. Since the concentration of the nanoparticles is very low we can consider that the fluid in this simulation has physical parameters of water, with a density of 1000 kg/m3 and the dynamic viscosity of 10 Pa s. Fig. 7 presents the simulation results for the velocity field of the fluid in a section parallel in the plane xOy. We can see a constant flow in the channel. 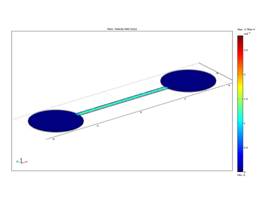 Fig. 7. Velocity field in the microchannel. 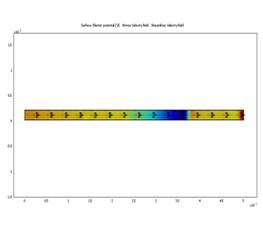 Fig. 8. Electric potential along the microchannel after the activation of the electrodes.

The second step of the simulation consists in the solving the Stokes Flow problem to determine the movement of the fluid through the microchannel. Fig. 9 presents the velocity field in the channel under the influence of the electric potential. The fluid that flowsthrough the microfluidic channel is an aqueous solutions with suspended magnetic nanoparticles. The simulation showed that the maximum value of the fluid velocity in the channel is 1.53 mm/s. 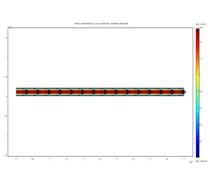 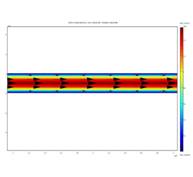 Fig. 9. Velocity field in the microchannel under the influence of the electrostatic field: (a) general view; (b) close up.


The diffusivity of the suspended nanoparticles is 0.2 m2/s and the concentration at the channel inlet is 0.1 mol/m3. Fig. 9 presents the velocity graph in the transversal section in the middle portion of the channel (Fig. 10). 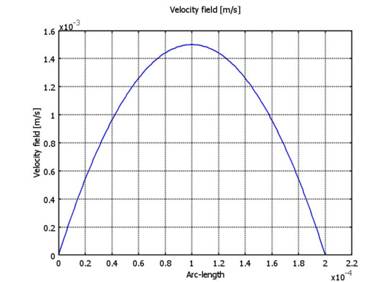 Fig. 10. Velocity of the fluid in the transversal section in the

middle portion of the channel.


Magnetite solutions functionalized with various metals have been were prepared, characterized and tested. We manufacture a microfluidic device using SU-8 polymer material and gold electrodes in order to observe the behavior of the magnetite solutions. The magnetite nanoparticles (simple or functionalized) in solution presented an agglomerations and formed crystals with different sizes (SEM investigations). Special property of magnetite fluids is a combination of normal liquid behavior and magnetic control of position and flow. The microfluidic system was characterized with different techniques: SEM, FTIR and white light interferometry. It was observed that particles in aqueous solution have a controlled movement from the inlet reservoir to the outlet reservoir, under direct or in reversed polarization. The simulations of the liquid flow within the microchannel were performed using COMSOL Multiphysics software, in order to calculate the fluid velocity. Due to their physical, chemical, mechanical and thermal properties the nanoparticles obtained we shall use our device in further work regarding bio-applications.